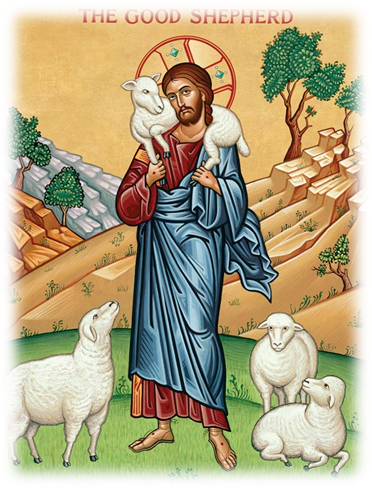 The Fourth Sunday of Easter

Sermon by By Christopher Ward, Reader

“I am the good shepherd. I know my own and my own know me.”

Some words we heard today from our Gospel reading. May I speak in the name of Almighty God, Father, Son and Holy Spirit. Amen.

There is something very special about the Easter season. For me, there is a parallel with what it is like at the start of many a flight I have taken, and many of you have probably had a similar experience. I’ve gone off to Stansted, or perhaps Gatwick or Luton, at some unearthly hour. It’s typically a bit chilly, and a bit grey and misty, or worse. I battle my way through the grind of all the airport formalities, and finally board the aircraft. The plane eventually takes off into the misty gloom, and about a quarter of an hour or so into the flight we suddenly leave all the cloud and murk below us, and burst forth into brilliant sunshine. I always find this a special moment, and I imagine that the disciples must have felt likewise when they first encountered the Risen Christ.

In fact, I find it virtually impossible to imagine the excitement of those disciples of Jesus who actually lived through that first Easter season. Their encounters with the Risen Christ were so contrary to all human experience of death presenting as a one-way street that it must have been quite overwhelming. Perhaps we should share that feeling of overwhelming excitement when we say those words, “Alleluia, Christ is risen”. And perhaps we should also feel it when we remember our spiritual death and our rising with Christ in baptism.

Today’s Gospel reading is the second parable with a shepherding theme set out in chapter 10 of John’s Gospel. Jesus is arguing with those described by John as ‘the Jews’. The first[1] is the parable about the shepherd entering the sheepfold through the door, whereas anybody climbing in otherwise is a thief and robber. This parable was not understood by his audience, so he went on to tell them the parable we heard today.

The image of a shepherd and his flock would have found a ready echo with many in rural Galilee. It would also have struck a chord with those familiar with the Jewish scriptures, to us the Old Testament.  Perhaps the best known example today is the psalm we heard today – psalm 23 – the words of which have provided hope and comfort to countless people over the centuries. But there are many other such references, such as the plea in psalm 80, “Hear us, Shepherd of Israel”, and the words in chapter 40 of Isaiah, verse 11, speaking of God, “Like a shepherd he will tend his flock and with his arm keep them together; he will carry the lambs in his bosom and lead the ewes to water”.

And in this parable today, we have an echo of those words from Isaiah. In it, he lays out clearly the unconditional love that a good shepherd has for the flock which he owns, and which know him, a love which goes far beyond that which comes from any employee to whom the flock might be entrusted. Indeed, the terms in which Jesus describes the lengths to which he has taken that love remind us not only of the events of Good Friday and Easter Sunday, but also of the crucial fact that he chose to make the sacrifice of himself on the Cross for the benefit of his flock. This really was unconditional love at work.

How was this parable received by the Jews? John sets this out in the verses immediately following the passage we heard.[2] They divided into two camps. Many of them said that Jesus was out of his mind and possessed, and on this basis questioned the sense of listening to him. But others commented, “No one possessed by a demon could speak like this”. So I think the jury is still out on how many of the Jews actually got the message of this second parable. Collectively, they clearly did not actually ‘get’ Jesus and his message, despite the two parables.

What message does it have for us today? We are of course a very different group from those described by John as ‘the Jews’; unlike them we have been baptised in Christ, so we know him and he knows us. And to understand the message of this parable, I think we have to recognise two points; first, that Jesus is no ordinary shepherd and second, that we are no ordinary sheep.

Why do I say that Jesus is no ordinary shepherd? First, because he makes clear that his love for his sheep – that is to say us – is absolutely boundless. A human shepherd may have deep affection for the flock and a deep interest in them prospering. But he nonetheless quite happily accepts the economic need to send the lambs off to market and to cull the barren ewes – sheep come and sheep go, it’s all part of running the flock.

And this brings me on to the second reason – Jesus is not like that at all; he does not cast sheep out from his flock – he wants to get all the sheep in the world into one big fold! As John writes at verse 16, “I have other sheep that do not belong to this fold. I must bring them also, and they will listen to my voice”. What human shepherd wants to bring all the sheep in the world into one flock with one shepherd?

And that brings me on to why I say that we are no ordinary sheep either. How are all Jesus’ sheep going to be brought into the fold? I think the answer to that is through us. Verse 16 is a clear call to mission; it is through the example that we set in our lives and the scale of the love that we show to others that they will come to know the love of Jesus and so join his flock. We cannot just sit there and metaphorically graze contentedly.

Finally, can I encourage you when you get home to have a look at the epistle reading set for today – 1 John chapter 3, verses 16-24? It’s not a long passage, but it helps to spell out the practical significance of life in Christ in our daily lives – what it means to be part of Jesus’ flock. It starkly poses the question, “How does God’s love abide in anyone who has the world’s goods and sees a brother or sister in need and yet refuses help? And it concludes by reminding us, “All who obey his commandments abide in him, and he abides in them. And by this we know that he abides in us, by the Spirit that he has given us”.