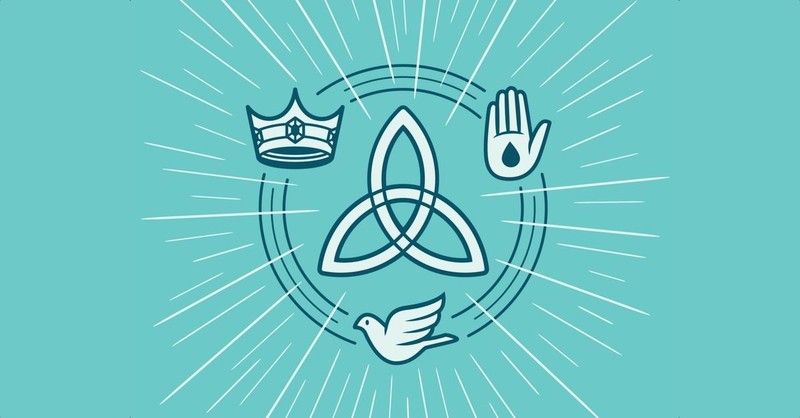 Sermon by By Christopher Ward, Reader

“Very truly I tell you, no one can enter the Kingdom of God without being born of water and Spirit.”

Some words we heard today from our Gospel reading. May I speak in the name of Almighty God, Father, Son and Holy Spirit. Amen.

These words are particularly relevant to our worship today because later on Samantha, George, Annalise and Joseph will be baptised, and I would like to add my own welcome to them.

Why is it so important? Because it is through the Holy Trinity that God reveals Himself to us. The doctrine has, over the years, developed a reputation as difficult to understand, but if we have the humbleness to remember that God is in the driving seat and does the revealing rather than us doing the discovering, and that we, in seeking to understand his revelation are constrained by the limits of human language, inspiration and understanding or, to put it in those wise words of St Paul, “For our knowledge and our prophecy alike are partial”[1], it becomes much easier.

In fact, it is I think quite helpful to look at this through the eyes of the early church. While the foundations of a doctrine of the Trinity can be found explicitly in the New Testament in a couple of places,[2] the New Testament does not shed further light on what it means in practice. The first members of the Church had personally encountered Jesus in the flesh, or at least knew somebody who knew somebody who had. And they were confidently expecting a quick physical return of Jesus; each of the synoptic Gospels contains a promise by Jesus that some of them would not taste death before they had seen the Kingdom of God.[3] So it was not a priority to delve into the precise nature of God; this was a sprint, not a marathon.

However, as the last of those who had any direct link with Jesus died, and there was no evidence that a physical Second Coming was in prospect in the near future, there developed something of a crisis of confidence in the Church. Where and what was their God, in whom they had placed so much trust and faith? So much attention was then focussed on the nature of this God. After several centuries of debate and experience, study of the Scriptures, some bitter disagreement and a number of blind alleys of heresy, the vision of the Holy Trinity emerged as the best representation that human minds could fashion of the revealed God. In essence, the three modes of experience of God – Father, Son and Holy Spirit – were recognised as three modes of experience of one God, and as giving us knowledge of the real being of God.

And that representation has stood the test of time. So, what is the doctrine of the Trinity? It can be summed up in three statements:

By the early fifth century, the Church concluded that it was through the Trinity that it could best remain faithful to the self-revelation of God, both in the Scriptures and through human history.

So we are celebrating two important things today. One is that it is through the Trinity that our God is revealed to us. That is important in helping us get a right relationship with Him; He is in the driving seat. The other is that the Trinity is what ultimately binds all Christian people together. Doctrine does have a bit of a bad name because it is often seen as divisive. But the doctrine of the Holy Trinity is universally accepted across the Christian Church; anyone in good standing in any church which subscribes to the doctrine of the Holy Trinity is welcome to take Communion here today, as the service booklet says. The Holy Trinity is the glue that binds all Christians to God and to each other; it is a symbol of our underlying unity.

In our readings today, we also learn a lot about the character of the God revealed to us in the Trinity. In our passage from Romans, we read that all who are led by the Spirit are children of God, adopted by God and thus heirs of God and joint heirs with Christ. And our Gospel reading reminds us of the endless love of God, and the extent of the sacrifice He was prepared to make – the sacrifice of His own Son – to save all of us.

So, can I finish by saying to Samantha, to Joseph, to Annalise and to George, this is the God into whom you will very shortly be born through water and the Spirit, a God whose love and faith is enduring, who spoke through the prophets in olden times; who sacrificed Himself for us on the Cross; and who continues to speak to us day by day through the Spirit; and who offers everlasting life to all who believe in Him. Our prayer today for you is that you will be inspired by His overwhelming love for the world to live out your lives to his praise and glory.